The huge spinoff benefit is the magnifying power of the Internet. Big numbers started coming in immediately on YouTube. Although only a few days have passed since the interview, the segment reached as high as fourth place for the week in politics and news, and third place in most discussed. These numbers hopefully will go much higher.
Direct link to this video: http://www.youtube.com/watch?v=oO2yT0uBQbM
Please forward and post this link widely! 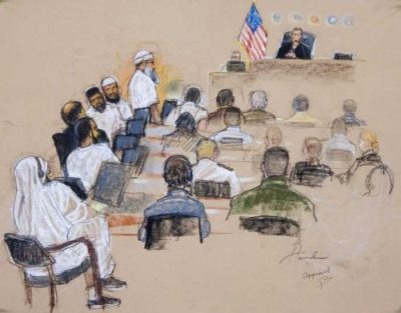 One of the Main Sources for the 9/11 Commission Report was Tortured Until He Agreed to Sign a Confession that He Was NOT EVEN ALLOWED TO READ
Washington's Blog, Thursday, May 14, 2009

A special report from NBC news states:
The NBC News analysis shows that more than one quarter of all footnotes in the 9/11 Report refer to CIA interrogations of al-Qaida operatives who were subjected to the now-controversial interrogation techniques. In fact, information derived from the interrogations is central to the Report’s most critical chapters, those on the planning and execution of the attacks. The analysis also shows - and agency and commission staffers concur - there was a separate, second round of interrogations in early 2004, done specifically to answer new questions from the Commission.
9/11 Commission staffers say they "guessed" but did not know for certain that harsh techniques had been used, and they were concerned that the techniques had affected the operatives’ credibility. At least four of the operatives whose interrogation figured in the 9/11 Commission Report have claimed that they told interrogators critical information as a way to stop being "tortured." The claims came during their hearings last spring at the U.S. military facility in Guantanamo Bay, Cuba...
Fourteen of the highest-value detainees had their initial hearings this spring before the Pentagon’s Combatant Status Review Tribunal. The tribunal acts as sort of a grand jury, charged with determining if a detainee should be held over for trial. Four of them said they gave information only to stop the torture. Although details were redacted in all the detainees’ testimony, the tribunal permitted the inclusion of a letter from a detainee’s father in one case, citing what he claimed was American torture of his son.
This torture only stopped when Majid agreed to sign a statement that he wasn’t even allowed to read.
Indeed, as legal experts have pointed out, and 9/11 Commission Director Zelikow tacitly acknowledges, evidence based on torture is not reliable. As the NBC news report states:
"We were not aware, but we guessed, that things like that were going on," Philip Zelikow, the 9/11 Commission executive director, told NBC News. "We were wary…we tried to find different sources to enhance our credibility."
Specifically, the NBC News analysis shows 441 of the more than 1,700 footnotes in the Commission’s Final Report refer to the CIA interrogations. Moreover, most of the information in Chapters 5, 6 and 7 of the Report came from the interrogations. Those chapters cover the initial planning for the attack, the assembling of terrorist cells, and the arrival of the hijackers in the U.S. In total, the Commission relied on more than 100 interrogation reports produced by the CIA. The second round of interrogations sought by the Commission involved more than 30 separate interrogation sessions.
No one disputes that the interrogations were critical to the Commission’s understanding of the plot.,,
Zelikow said the lack of direct access forced the Commission to seek secondary sources and to request the new round of questioning. In the end, says Zelikow, the Commission relied heavily on the information derived from the interrogations, but remained skeptical of it. Zelikow admits that "quite a bit, if not most" of its information on the 9/11 conspiracy "did come from the interrogations." "We didn’t have blind faith," Zelikow tells NBC News. "We therefore had skepticism. The problems (in getting cooperation from the agency) enforced our concerns about the underlying interrogation.
A former senior U.S. intelligence official says the Commission never expressed any concerns about techniques and even pushed for the new round...
Commission staffers interviewed by NBC News do not dispute the official’s assertion that they didn’t ask about interrogation techniques. "We did not delve deeply into the question of the treatment of the prisoners", as one put it. "Standards of treatment were not part of our mission." According to the other, "We did not ask specifically. It was not in our mandate."...
Michael Ratner, president of the Center for Constitutional Rights, says he is "shocked" that the Commission never asked about extreme interrogation measures.
"If you’re sitting at the 9/11 Commission, with all the high-powered lawyers on the Commission and on the staff, first you ask what happened rather than guess," said Ratner, whose center represents detainees at Guantanamo. "Most people look at the 9/11 Commission Report as a trusted historical document. If their conclusions were supported by information gained from torture, therefore their conclusions are suspect."...
Zelikow adds that one particularly telling position was the agency’s refusal to let the Commission interview the interrogators.
"We needed more information to judge reports we were reading," he said. "We needed information about demeanor of the detainees. We needed more information on the content, context, character of the interrogations."...
Ratner argues "if they suspected there was torture, they should have realized that as a matter of law, evidence derived from torture is not reliable, in part because of the possibility of false confession…at the very least, they should have added caveats to all those references."... 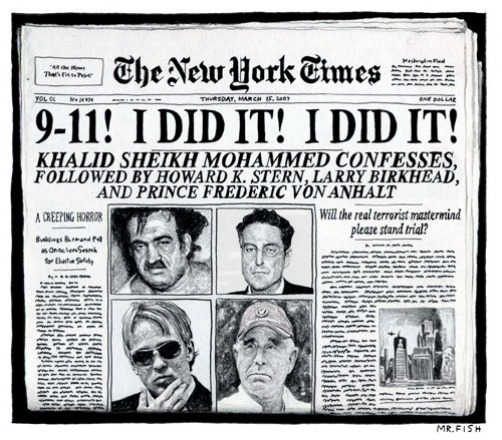 On the morning of April the 6th, Professor Niels Harrit of Copenhagen University in Denmark, who is an expert in nano-chemistry, was interviewed for an entire 10 minutes during a news program on the topic of the nano-thermite found in the dust from the World Trade Centre, (WTC).
During this news report, Harrit, who is one of the nine scientists primarily responsible for the pivotal paper entitled: ‘Active Thermitic Material Discovered in Dust from the 9/11 World Trade Center Catastrophe’,  talks about how their research, which was conducted over 18 months, led to the conclusion that planes did not cause the collapse of the three buildings at the WTC on 9/11.
He says that they found such large quantities of nano-thermite in the dust from the WTC, that he believes that this compound, which has the ability to melt metal,  must have been brought into the WTC site in tonnes, on pallets.   Consequently, he suggests that we need to address this matter with those who were in charge of the security at the World Trade Centre on 9/11.
Harrit, like Dr Steven Jones who also played a major role in this ground-breaking research, refers to their findings as “the loaded gun” and suggests that military personnel might be able to enlighten us more on the little-known topic of nano-thermite, which differs from regular thermite in a number of significant ways, including that its ignition temperature is far lower than that of the conventional kind, [1].
Related:[1]. Active Thermitic Material Discovered in Dust from the 9/11 World Trade Center Catastrophy by Niels Harrit et al., 2009
The Seventh Tower by Niels Harrit, 2006
Nanothermites and WTC dust by Kevin Ryan, 27/12/08
Truth & Deception: An Interview with Kevin Ryan on 9/11,  14/2/09
[ Denmark Debating 9/11: Chemist Niels Harrit in the News on Nano-thermite in WTC Dust, IndyBay, April 11, 2009 ]
Interview with Dr. Steven Jones by Alex Jones, March 25, 2009
Audio clips of interview with Dr. Steven Jones 3/25/09: www.911blogger.com/node/19762