Billionaire club in bid to curb overpopulation
By John Harlow, The Sunday Times, May 24, 2009 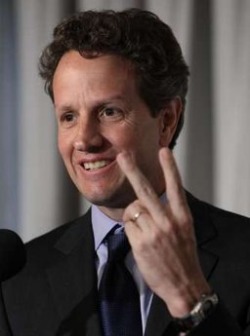 Intrepid Bilderberg investigator and reporter Jim Tucker of the American Free Press (www.americanfreepress.net) confirms that U.S. Treasury Secretary Timothy Geithner will attend this year’s Bilderberg meeting in Athens, Greece.
Geithner’s presence will be in violation of the Logan Act, intended to prohibit American citizens without authority from interfering in relations between the United States and foreign governments. Congress established the Logan Act in 1799. The only Logan Act indictment occurred in 1803. It involved a Kentucky newspaper article that argued for the formation in the western United States of a separate nation allied to France. No prosecution followed.
Tucker told Alex Jones today that Geithner will attend the secretive meeting to talk about global government. Geithner recently announced while addressing the Council on Foreign Relations that he supported a proposal to replace the dollar as the world’s reserve currency with a composite of currencies that would be managed by the International Monetary Fund.
“Geithner, who has overseen Obama’s bailout agenda since taking over from Hank Paulson, is the perfect stooge to implement the global financial regulatory systems that elitists have called for in the aftermath of the financial downturn,” writes Paul Joseph Watson today. “Geithner’s presence at Bilderberg is noteworthy, not only because Bernanke attended immediately before the economic crisis last year, but also because Bilderberg’s agenda for 2009 is heavily weighted towards the financial crisis.”
Other U.S. officials will attend the meeting. “US Deputy Secretary of State James Steinberg will be the first member of President Barack Obama’s administration to have a meeting with Greek officials in Greece, sources said yesterday,” reports Kathimerini, Greece’s international English language newspaper. “Steinberg will be in Athens for a meeting of the international invitation-only club, the Bilderberg Group, which begins today and runs until Saturday. Sources said that Steinberg is due to meet with Prime Minister Costas Karamanlis and Foreign Minister Dora Bakoyannis.”
“Whether Lucifer will be down there on the sun-loungers remains to be seen,” Roger Boyes and John Carr write sarcastically for the Times Online. “But what we have been able to establish from a World Bank spokesman, Alexis O’Brien, is that the organization’s president, Robert Zoellick, will be in Athens on unspecified business on May 14. And that US Treasury Secretary Tim Geithner’s public schedule is mysteriously empty for the next two days.”
Robert Zoellick was previously a managing director of Goldman Sachs, United States Deputy Secretary of State, and U.S. Trade Representative. He is a member of the Council on Foreign Relations and the Trilateral Commission and attended Bilderberg meetings in 1991, 2003, 2006 and 2007.