government no longer accepts lawful money (see 12 USC 152), "gold and silver coin of the United States," to pay debt as was possible pre-1933.  The fed thinks they own us because we have been living by virtue of real and personal property redeemed by their debt-based notes and credit system.  Other than what China allows to be stolen by its  delay in spending its declining 'dollars,' what property of China's could the fed actually seize?

░▒▓►video◄▓▒░ Lindsey Graham slams Ron Paul at SC GOP convention
By David Edwards, Raw Story, May 18, 2009
Lindsey Graham faced hecklers at the South Carolina Republican Convention Saturday [May 16, 2009].
“Ron Paul is not the leader of this party,” Graham said, prompting a few jeers. Some people yelled, “Yes, he is!”
And other astounding statements showing he either is in denial or he knows the establishment's drum he beats is broken beyond repair.

Fed, what've you been doing with the 'money' all this time? 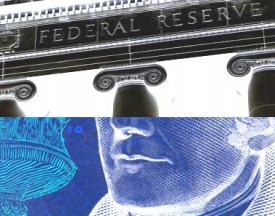 May 11, 2009 Rep. Alan Grayson asks the Federal Reserve Inspector General about the trillions of dollars lent or spent by the Federal Reserve and where it went, and the trillions of off balance sheet obligations. Inspector General Elizabeth Coleman responds that the IG does not know and is not tracking where this money is.
http://www.bloomberg.com/apps/news?pid=washingtonstory&sid=aGq2B3XeGKok

The stimulus package the U.S. Congress is completing would raise the government’s commitment to solving the financial crisis to $9.7 trillion, enough to pay off more than 90 percent of the nation’s home mortgages. The Federal Reserve, Treasury Department and Federal Deposit Insurance Corporation have lent or spent almost $3 trillion over the past two years and pledged up to $5.7 trillion more. The Senate is to vote this week on an economic-stimulus measure of at least $780 billion. It would need to be reconciled with an $819 billion plan the House approved last month.
Only the stimulus bill to be approved this week, the $700 billion Troubled Asset Relief Program passed four months ago and $168 billion in tax cuts and rebates enacted in 2008 have been voted on by lawmakers. The remaining $8 trillion is in lending programs and guarantees, almost all under the Fed and FDIC. Recipients’ names have not been disclosed.
“We’ve seen money go out the back door of this government unlike any time in the history of our country,” Senator Byron Dorgan, a North Dakota Democrat, said on the Senate floor Feb. 3. “Nobody knows what went out of the Federal Reserve Board, to whom and for what purpose. How much from the FDIC? How much from TARP? When? Why?”

Financial Rescue
The pledges, amounting to almost two-thirds of the value of everything produced in the U.S. last year, are intended to rescue the financial system after the credit markets seized up about 18 months ago. The promises are composed of about $1 trillion in stimulus packages, around $3 trillion in lending and spending and $5.7 trillion in agreements to provide aid. The total already tapped has decreased about 1 percent since November, mostly because foreign central banks are using fewer dollars in currency-exchange agreements called swaps.
Federal Reserve lending to banks peaked at a record $2.3 trillion in December, dropping to $1.83 trillion by last week. The Fed balance sheet is still more than double the $880 billion it was in the week before Sept. 17 when it agreed to accept lower-quality collateral.
The worst financial crisis in two generations has erased $14.5 trillion, or 33 percent, of the value of the world’s companies since Sept. 15; brought down Bear Stearns Cos. and Lehman Brothers Holdings Inc.; and led to the takeover of Merrill Lynch & Co. by Bank of America Corp.
The $9.7 trillion in pledges would be enough to send a $1,430 check to every man, woman and child alive in the world. It’s 13 times what the U.S. has spent so far on wars in Iraq and Afghanistan, according to Congressional Budget Office data, and is almost enough to pay off every home mortgage loan in the U.S., calculated at $10.5 trillion by the Federal Reserve.

‘All the Stops’
“The Fed, Treasury and FDIC are pulling out all the stops to stop any widespread systemic damage to the economy,” said Dana Johnson, chief economist for Comerica Inc. in Dallas and a former senior economist at the central bank. “The federal government is on the hook for an awful lot of money but I think it’s needed to help the financial system recover.”
Bloomberg News tabulated data from the Fed, Treasury and FDIC and interviewed regulators, economists and academic researchers to gauge the full extent of the government’s rescue effort.
Commitments may expand again soon. Treasury Secretary Timothy Geithner postponed until tomorrow an announcement that may invite private investment as a way to clear toxic debt from bank balance sheets. Measures that have been settled include a new round of injections of taxpayer funds into banks, targeted at those identified by regulators as most in need of additional capital, people briefed on the matter said.

Program Delay
The government is already backing $301 billion of Citigroup Inc. securities and another $118 billion from Bank of America. The government hasn’t yet paid out on any of the guarantees.
The Fed said Friday that it is delaying the start a $200 billion program called the Term Asset-Backed Securities Loan Facility, or TALF, to revive the market for securities based on consumer loans such as credit-card, auto and student borrowings.
Most of the spending programs are run out of the Federal Reserve Bank of New York, where Geithner served as president. He was sworn in as Treasury secretary on Jan. 26.
When Congress approved the TARP on Oct. 3, Fed Chairman Ben S. Bernanke and then Treasury Secretary Henry Paulson acknowledged the need for transparency and oversight. The Federal Reserve so far is refusing to disclose loan recipients or reveal the collateral they are taking in return. Collateral is an asset pledged by a borrower in the event a loan payment isn’t made.

Fed Sued
Bloomberg requested details of Fed lending under the Freedom of Information Act and filed a federal lawsuit against the central bank Nov. 7 seeking to force disclosure of borrower banks and their collateral. Arguments in the suit may be heard as soon as this month, according to the court docket. Bloomberg asked the Treasury in an FOIA request Jan. 28 for a detailed list of the securities it planned to guarantee for Citigroup and Bank of America. Bloomberg hasn’t received a response to the request.
The Bloomberg lawsuit is Bloomberg LP v. Board of Governors of the Federal Reserve System, 08-CV-9595, U.S. District Court, Southern District of New York (Manhattan).